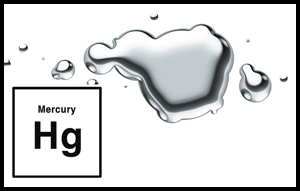 What if I told you that you are suffering from mercury poisoning?  If you are like the vast majority of average 21st century citizens of planet earth who ingest commercially produced foods you are most likely living with increasingly dangerous levels of mercury in your body that is affecting your vital organs, especially your brain.  Newsflash!  Mercury has long been known to be found in our ocean’s fish supply, but it is increasing to alarming levels in most all other food sources, even the vegetables we eat.

When I say commercially produced foods, I mean like those foods sold in supermarkets that are provided by large food distribution companies.  Before you think you are out of the woods because you buy your food from local producers, the levels of mercury in ANY foods that are not certifiably organically grown have the same problem with heavy metals like mercury.  If you eat organically produced foods, there is a far less chance that you will be consuming toxins like mercury in your diet.   The shocker for me was to learn just how many people are being affected by mercury poisoning and the symptoms of it that we see all around us.

Over-exposure to mercury can cause a world of hurt on the human body.

Tens of millions, if not more of those living in the United States are suffering from mercury toxicity.  So, what’s the big deal about mercury? Mercury is a neuro-toxic heavy metal. Over-exposure to it can cause a world of hurt on the human body.  It has been found in almost everything from packaged processed foods to the very soils that our fresh food supply is grown in.  If you buy non-organic industrially grown foods, exposure to mercury in inevitable.

Research has identified trace amounts of mercury in everyday packaged foods made with high–fructose corn syrup. In one investigation, mercury was found in 31 percent of the products tested.  Some of those processed foods included fruit punch mix, cola drinks, salad dressings barbecue sauce, and ketchup. REALITY CHECK:  Would you bite off the end of a thermometer? If you are eating certain foods, you could be. “Women are already exposed to mercury from soil, water and air pollution, plus  known food sources like seafood,” explains Liz Lipski, Ph.D. Founder and  president of Innovative Healing in Asheville, North Carolina.”  She goes on to say that, “even seemingly small additional amounts are cause for concern.”

The health concerns are alarming, but most often overlooked by even ‘health-conscious’ consumers.  When ingested, even in the smallest amounts, mercury accumulates our vital organs like the liver, kidneys, and – are you ready for this?  Mercury tends to build up in the brain as much if not more than other organs.  A few of the many adverse effects of mercury poisoning, especially in the brain, is that it damages cell DNA and disrupts the cellular function in our bodies that result in symptoms like concentration difficulties, volatile mood swings, low energy, and severe headaches. I know what you are thinking.

WHAT CAN I DO ABOUT IT?

The bad news is that if you are reading this, and do not make a willful act to make the necessary changes in your food intake, you will suffer from the irreversible effects of mercury poisoning.  The good news is that if you are willing to make some simple changes in your diet and lifestyle, it is entirely possible for you to not only prevent additional damage in your body from mercury, but to reverse the symptoms of it. Here are some immediate steps you can take to reduce the amount of mercury in your body and to naturally heal your body from the aeffectsof mercury. 2. FLUSH YOUR BODY WITH NON-TOXIC PROTEIN

Increase your protein levels, especially non-mercury laden proteins like those found in vegetable-based protein sources.   Let me get this out of the way right up front.  Yes, vegetables have protein.  LOTS of high quality protein with complete amino acid chains that your body loves!  This is one of  the biggest excuses that an animal meat addict has for why they cannot become a vegetarian.  Before I lose you here – speaking to meat lovers – I am not saying you have to become a vegetarian to reverse the damage of mercury poisoning in your body.

I AM however saying that if you buy meats that are not organically fed and organically raised, or use whey protein which is not organically produced and manufactured, you are ingesting mercury with every bite – fish, poultry, and dairy included.  Here is why you need to increase these healthy proteins in your diet. Glutathione, an antioxidant molecule manufactured in the liver,  normally attaches to mercury and helps carry it out of the body.

Glutathione, an antioxidant molecule manufactured in the liver,  normally attaches to mercury and helps carry it out of the body.

The problem is that this constant attachment of glutathione to mercury in order to get it out of the body depletes your glutathione levels.  This is not good since one of the results of low glutathione in your body is the inability of the body to purge our body of the mercury that accumulates. By increasing your intake of healthy, non-mercury carrying proteins, you can help increase glutathione production in your liver.   A high quality vegetable-based protein can help.  I get my vegetable protein from a combination of yellow pea protein, hemp seed protein, and brown rice protein.  There are other vegetable sources of protein that I get through my normal vegetarian diet, but for most who are starting out on the road to better living and the restoration of their youth and vitality, I recommend that protein supplementation be a part of one’s diet, and include yellow pea protein, hemp seed protein, and brown rice protein.

3. INCREASE YOUR INTAKE OF GARLIC Garlic is one of the best things you can eat, especially raw or only slightly sautéed.  You can even buy garlic capsules if you don’t want to be chewing on garlic cloves.  According to top scientists at Bharathidasan University in India, garlic has organo-sulfurs (as do onions) that aid in shielding the central nervous system from mercury toxicity.  Their research shows that the sulfur-containing compounds found in garlic and onions bind to mercury before it has a chance to  attach to bodily cells.

This means that instead of mercury accumulating in our bodies, mercury is disposed of naturally. If you don’t as a general rule eat a lot of garlic, some of the best ways to consume it on a daily basis is as I had mentioned just a moment ago, is to take garlic capsules daily. Some of the ways that I get my daily garlic fix is through raw hummus that I make as one source of my protein.  I just mince up a few cloves of fresh garlic and add it to my hummus as i process it in my food processor.

If you want to eat more healthily, but don’t want to do the vegetarian thing, try making an egg white omelet with 3 or 4 diced up and sautéed garlic cloves that you have lightly sautéed with some red pepper, spinach, and onion.  Stir fry veggies are a great way to incorporate garlic into your diet as well.  I make a killer good garlic, poppy seed, cayenne pepper, and lime salad dressing that uses LOTS of finely diced garlic in a warm olive oil base for my salad dressing.  I also make fresh salsa that uses lots of garlic as well.

4. GET IN HABIT OF EATING BRAZIL NUTS Selenium  found in Brazil nuts detoxifies your body from mercury as well.  Selenium combines with mercury to form what are called mercury selenides.  These are biologically neutral molecules that do not damage cells or make their way into your brain.  There is a great article in “The Complete Natural Medicine Guide to Women’s Health” by Robert  Rose (Pub 2005).  If you can find yourself some organically raised turkey or chicken, or you like cottage cheese (organic of course), these are all adequate sources of selenium, but eating just two brazil nuts a day will increase your selenium levels by as much as 60% which is substantial enough to be equal to the benefit of taking a selenium supplement.

8 Thoughts to “You Have Mercury Poisoning – Now What?”